Around the age of four I vividly remember sitting next to my mother on our robin-egg-blue vinyl sectional couch.  At the time, we were living in Coast Guard housing in Charleston, Oregon,  in a house that today would be called a “dump”.  In the back of the house where the bedrooms were, it was damp and dark, with the outside walls just feet away from a small creek where open sewage flowed.  In the bedroom I shared with my brother, a thick musty smell seeped through the walls and floors like heavy fog, making it hard to breathe. 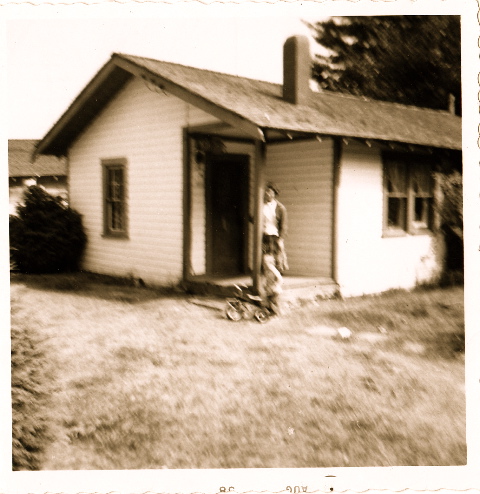 The home I remember hearing my first poem.  Charleston, Oregon, USCG Station housing.  This picture was taken in the summer of 1958.  My mother is on the porch with my brother in the yard below her.

I recently learned the jewel colored couch my mother and I were sitting on had been purchased through a special arrangement with a local furniture store, one section at a time, as my father’s small income allowed.   In the darkness of those rooms, I imagine those blue gems of hope being delivered every few months, and with them, the dream of a better life.

It is in this setting that I remember being introduced to poetry.  As I look back on the lack of resources my parents had economically, socially and educationally, it is a wonder there were any books in the house, much less poetry.

I do not know if my parents had purchased the entire couch at the time of this story, or if other pieces were still to come, but I do know I  was plopped on an end piece, where a cigarette had already burnt a hole in the arm.   I remember the warmth of my mother pressed against my left side, and the cool of  blue vinyl on my right.  I can still feel the scratch of hard burnt plastic against my index finger as I fished the black rimmed hole for the soft batting below.  I can still see my legs dangling in mid-air as I rubbed my bare feet together to remove the sand from my toes and heels. 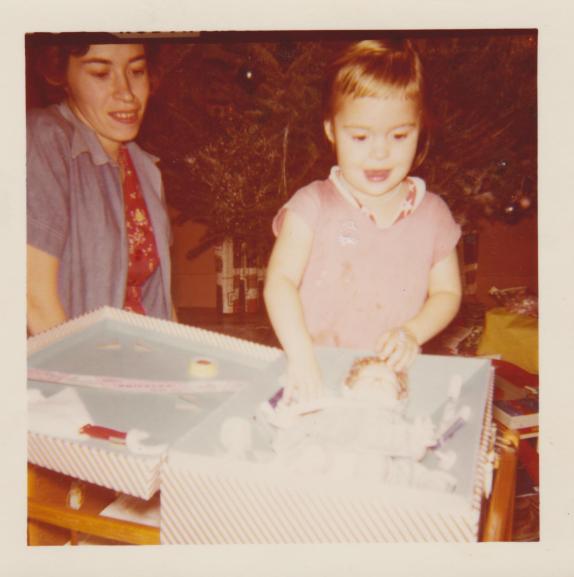 My mother and me, about the time she read me the first poem I remember.

I don’t recall my mother reading to me as a child, except on this one day, on that blue couch, although I am sure she must have. I do remember her voice was soft and tender as she read me a poem called  The Babes in the Wood.

It was a sad poem about children lost in a landscape that was as familiar to me as the one out the back door where I played.   I sat quietly and listened, then began to cry as the poem shifted from a story about lost children to a story about dead children.  Any hope of a happy ending was erased with five heart-rending words, they lay down and died.

Embarrassed at my sudden display of tears, (as if I had been caught doing something naughty), I quickly buried my face in my mother’s side, hoping I imagine, that by hiding I might lessen the emotion I was feeling. What I felt was overwhelming sadness, as I  imagined how lonely and frightened these children must have been.

I wonder now if this was the first time my cloak of childhood innocence was pulled back and I saw the fragility of existence.

Theodore Roethke was quoted as saying,  Should we say the self, once perceived, becomes the soul?    Were those feelings, ignited by words, what transported me to a larger universal truth (we all die)?  Was this my first entry into my own soul?

As I matured into a girl, a teenager, a woman, poetry provided me words by which to explore the buried places within myself.  It eventually provided me a voice, and a place I could connect to the universal nature of all experience.  It both validated and expanded my own journey.  It provided a broader view outside the bubble of my own life.

Recently, my Aunt shared that her mother, my Grandma Lambert, had  read this poem to both her and my mother. It was the first time I had heard the origin of this poem in my family history. I now wonder where my grandmother first heard this poem, and while I may never know,  I am happy my aunt shared her memory of this poem with me.

My Aunt on the right and my mother on the left.  My mother was almost the same age in this picture as I was when she read me, The Babes in the Wood. 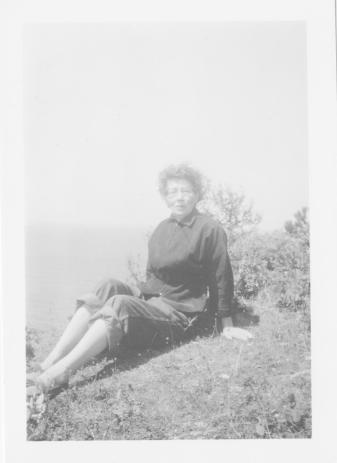 I  can picture my mother and aunt sitting near my grandmother, much in the same way I sat near my mother.  The poem obviously left a lasting impression on both my aunt and mother, as they still remember the poem long after they were both young mothers, reading it aloud to their children.  I in turn read this poem to my children, not knowing at the time the generational journey it had travelled.

I don’t know if my children remember me reading this poem to them,  or whether it had an impact on them. I don’t know if they will share it with any future children.

What I do know is that three generations of women read the same words aloud to their children.

What I do know is poetry was a thread between generations, that helped me in some small way see what their voices never said.

What I do know, is not one of them, was afraid of its sad ending.

This site uses Akismet to reduce spam. Learn how your comment data is processed.